Ciara Murphy is an associate at Debevoise & Plimpton LLP based in London, specializing in public international law, international arbitration and human rights. In addition to advising individuals, companies and sovereign States in cross-border disputes and international arbitration, Ciara maintains an active pro bono practice.  She has advised non-governmental organizations on human rights claims before the European Court of Human Rights, the African Commission on Human and Peoples’ Rights and United Nations treaty bodies.  She has worked with Amnesty International, Human Rights Watch, Rights Watch (UK), Reprieve, Centre for Reproductive Rights and Haringey Law Centre, among others.  She holds an LL.B. in Law and French from Trinity College Dublin and LL.M. degrees from the University of Michigan and the College of Europe (Bruges). 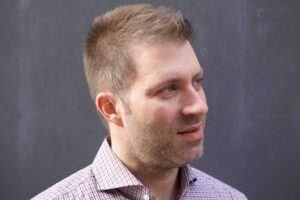 Adam is the founder of the New Media Advocacy Project. Adam is a graduate of Amherst College (1998) and Harvard Law School (2004). After finishing law school, he served as a law clerk for the United States Court of Appeals for the Ninth Circuit, and then received a Skadden Fellowship to work as a litigator at the Lawyers’ Committee for Civil Rights Under Law. After his fellowship, he joined the law firm, Debevoise & Plimpton, as a litigation associate, where he worked for two years, after which he left to found NMAP. Adam experimented with using video to support legal advocacy during his first summer in law school, working for a small, local NGO in Nigeria, where he made a movie to pressure the government to stop obstructing litigation seeking a remedy for a massive forced eviction that had left 300,000 people homeless. The strategy was a success, and Adam continued his video and new media experiments at the Lawyers Committee for Civil Rights. Working with hundreds of videographers around the country, Adam successfully used new media techniques to favorably settle race discrimination cases, pressure state legislatures to allocate money to low income communities after Hurricane Katrina, and document voting rights violations. Adam received an Echoing Green Fellowship to support NMAP in the spring of 2009.

Matt Murphy is CEO of Kids in the Game. Matt has spent the past several years building Kids in the Game (KING) into one of the most impactful sports based youth development organizations in the country, working with over 20,000 youth and 60+ schools last year. In 2018, New York University awarded Matt with the Lalia Rach Profile in Excellence Award for his commitment and innovation within NYC’s communities. Matt is active in the social impact and entrepreneurial circles as both a contributor and council member of Nationswell, Young Entrepreneurs Council (YEC), and Echoing Green Direct Impact. Matt‘s work has been featured in Forbes, Fortune, Entrepreneur, Inc, and Huffington Post and has been named one of the ‘Top 48 Entrepreneurs to Watch in NYC’. Under Matt‘s leadership, KING was also recently named to the Inc 5000 Fastest Growing Companies list (#1188) and was one of the youngest CEO’s at 29 to be named. In 2017, Matt founded Kids in the Game’s foundation, KING Kids, and acts as current Board Chair. Prior to KING, Matt built a successful online travel start-up and worked for J.P. Morgan’s Corporate & Investment Bank for 4 years, developing a strong background in corporate strategy, risk and controls, and sales & marketing. Matt played point guard for the University of Rochester, being named to the UAA 1st team All-Academic team for three seasons. While at Rochester, Matt also founded the university’s first investment club and completed a dual degree in political science and financial economics. Outside of work, Matt is active playing basketball, beach volleyball, practicing yoga, skiing, and checking out live music somewhere in Brooklyn where he lives.

Ruona Meyer is a journalist, researcher and media trainer with 19 years of experience across Africa, the UK, the Netherlands and Germany. She specialises in solutions journalism training and DEI consultancy for Africa-focused grants and donor organizations. Ruona currently manages the Africa Initiative at the Solutions Journalism Network, coordinating multilingual training, reporting and advocacy of the solutions approach across 40 newsrooms in Nigeria, Kenya, Uganda and Rwanda. The programme has reached over 940 journalists, student journalists and lecturers in newsrooms and universities across the target countries, as well as bespoke partnerships with media nonprofits across the continent that have delivered solutions journalism training curriculum for climate reporting, marginalized populations, environmental reporting, peace and security reporting, and gender-based violence. Ruona is currently a PhD scholar at De Montfort University in Leicester, UK. Her thesis explores the construct of power dynamics within transcontinental investigative journalism networks.
We use cookies on our website to give you the most relevant experience by remembering your preferences and repeat visits. By clicking “Accept All”, you consent to the use of ALL the cookies. However, you may visit "Cookie Settings" to provide a controlled consent.
Cookie SettingsAccept All
Manage consent